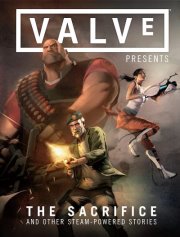 
Things From Another World in Portland welcomes creators from video game giant Valve Games November 12 from 7-10 p.m. Join Michael Avon Oeming (Powers), Andrea Wicklund, Ted Kosmatka, and Bay Raitt as they debut Valve Presents: The Sacrifice and Other Steam-Powered Stories from Dark Horse Comics, and purchase your copy before the official release date of November 16.

Not only will you enjoy complimentary food and beer (with valid ID), but also FREE in-store console and PC gaming courtesy of Ground Kontrol, Old Town Computers, and Valve. You might even win an original piece of Oeming's artwork from the book!

For 15 years, Valve has defined the cutting edge of video games. Now Valve joins Dark Horse Comics to bring three critically acclaimed, fan-favorite series to print in a hardcover collection of comics based on Left 4 Dead, Team Fortress, and Portal. With more than 200 pages of story, Valve Presents: The Sacrifice and Other Steam-Powered Stories is a must-read for fans looking to further explore the games they love, or comics readers interested in dipping their toes into new mythos!

Be sure to pick up your copy of Valve Presents: The Sacrifice and Other Steam-Powered Stories before it's available anywhere else! Meet the creators behind some of the most exciting games--and comics--in the world at TFAW in Portland November 12 from 7-10 p.m., and play games like Left 4 Dead, Team Fortress, and Portal 2
Posted by Unknown at 8:19 PM