Leia Weathington is a writer and  illustrator recently moved from San Francisco now living in Portland, Oregon. She is part of the San Francisco based Couscous Collective. She is working with Erika Moen in the new kickstarter  project Smut Peddler.

She has a long running web comic called Legend of Bold Riley. The strip was collected and colored by Vanessa Lynn.   It features several artists, Jason Thompson, Kelly McKlellan, and Konstantin Pogorelov.   It will be published by Northwest Press in the summer.

You can catch up with her on the podcast Chronicle of the Nerds and was recently on Nerd Fight II.

Her blog is A Happy Go Lucky Scamp

And her team just won the Art Battle at Stumptown 2012.

What projects are you working on currently?
I'm wrapping up book one of The Legend of Bold Riley, a full color book out this summer from Northwest Press. My big projects for this year is the art for a detective comic called K.I.M Investigations with local writer Ben Coleman and the the script for a Sci-fi story for Madison, WI artist Joanna Estep. I've also started scripting Bold Riley, book 2.

What is your artistic Process?

When I'm writing I tend to sit staring off into space for an inordinate amount of time just thinking of how I want to go about a particular story then have bursts of actually writing. When it comes to the drawing side of things I try to make my self do something everyday. Writing is much more natural for me than drawing so in order for things to get done art wise I have to make myself draw even when I really don't want to. Even if a drawing doesn't turn out the way I like there is at least something on the page for me to work off of when I do get in a really good groove later.

When are story writer, what is your process working with the illustrator?  Do you do more writing or Illustrating?
I worked with 5 other artists for Bold Riley and made the mistake at first of trying to really tightly control the visuals of the comic. That was something I learned to back off from pretty fast. If you are working with artists you probably decided to get into a collaboration with them for a reason. SO TRUST YOUR ARTIST! What I've started doing is making model sheets characters, objects and places that must look a certain way to maintain continuity in the story, after that I send photo references, script and descriptions of mood and setting and turn the artist loose to have fun with it.

I've prefer to write but I've been trying to refine my skills as an artist and work harder at pushing myself out of my comfort zone. I guess when I unironically came up with a concept of a race of characters whose features ended at the knee and floated around an entirely forested environment was when I realized I should cut the shit and draw things I don't like in order to not be a laughingstock.

What Comic/ Trade would you recommend?
Oh my god! Everyone, go buy Joe Hill and Gabriel Rodriguez, Locke & Key! Trade 5 should be out pretty soon and it's one of the most creative, addicting series I've ever read and the art is tasty as hell.

But, uh...I've also heard the Bold Riley book coming out from Northwest Press this summer is supposed to be pretty good too...

What Comic/ Trade would you recommend to someone new to comics?
That one really depends on what sort of stories a person likes! For younger readers Jeff Smiths 'Bone' and Gene Yangs 'American Born Chinese' and the always fun Cartoon History of the World by Larry Gonick. For older readers try Brian K Vaughan Ex Machina, David Bs Epileptic and Fumi Yoshinagas Antique Bakery. Actually everyone read everything by Fumi Yoshinaga. She's a rockstar.

How involved are you with the illustration, the look and feel, of the books you write?
I always want to be involved in setting the tone of a comic but I don't ever want to step in and try to dictate the style or nitty gritty layouts of a comic because that's the artist job and I don't want to throw salt in their game. I'm working pretty much freelance so I'm the one picking my colaborators on comics. If I didn't like the way they drew I wouldn't work with them. Every artist works differently too, Some want very, very detailed scripts that go over panel sizes and "camera" directions, Some work better with a loose script that opens up the possiblities in layout. It's just knowing your collaborators and playing to each others strengths. 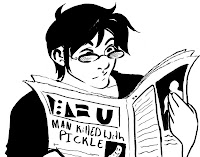 All of the photoshops and the computer bits and why my scanner makes that noise like I spilled coffee on it but I haven't spilled ANYTHING on it I promise.

What's the most important thing you've learned?
For the love of god be organized, don't take on too much at once, If you leave an illustration on the floor the cat will vomit on it.

Do you have a collection? If so, what is one of the items you're most proud of?
All of my hard covers editions and and everything I've bought directly from an artist at a convention. I can't pick just one thing I love...That's like picking which burrito filling I want, it changes daily.

What is your favorite genre of Comics?
Horror! or anything gory, gross, sticky and serious. The weirder the better.

What is your favorite TV show/ movie?
Avatar the Last Airbender and Black Books for TV shows and Strange Days and Cloudy With a Chance of Meatballs for movies.

How does the Portland comics culture shapes your work?
It makes me work harder! When 18 of your friends are coming out with hardcover trades every other week it really lights a fire under your ass.

What was your first comic convention?
Alternative Press Expo, San Francisco in 2007 I think.

What is your favorite part of comic conventions?
Meeting new people and going to the after parties.

If you weren’t doing comics what would you do?
There are things other than comics? I don't... I don't think I understand. I guess I'd be a toothless boxcar hobo, eatin' beans from a can and drinking Thunderbird.

Do you have a favorite restaurant that you would recommend?
Fonzi’s Bakabana Cabana on SE 32nd and Hawthorne is one of my favorite food carts. I always get the jungle bowl with sweet African chicken. I could eat that every day.

How long have you lived in Portland, what made you choose Portland?
I moved up here in August 2011 from San Francisco mainly to focus on my comics career and because I fell in love.

What is your favorite part of Portland?
The bars! Nowhere does happy hour like Portland.

Where in Portland/ Oregon would you most like to visit?
I'd like to go to Astoria at some point and I haven't been to the Rose
Garden yet.

Would you like to Illustrate for another media? or conversely, how would you feel about Illustrate a comic of a character from a different media, for example, Dr. Who, James Bond? What would you explore?
I really like doing art for bands. I listen to a lot of music when I'm working. I've done some illustration for local band Asteroid M and I should be doing the album art for Hail the Sun, a band in California.
Posted by Unknown at 6:52 AM